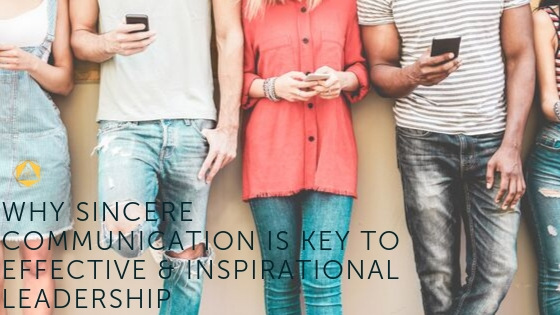 Why sincere communication is key to effective & inspirational leadership

For a really long time I pondered a burning question:

Why are some people such brilliant and inspiring leaders, and others are not? What makes a great leader?

The reason this question had me so intrigued was that, while most people in leadership positions where just doing an ok job, there were a few people … spread widely throughout the organizations I worked at – and definitely not only at the top –who were far, far better then most.

Their departments weren’t just getting by, they flourished. And they seemed to be filled with only highly productive, engaged, smart people. When these leaders were invited to explain their plans to the Minister, they were completely relaxed about it. They didn’t grovel and they weren’t busy saying ‘all the right things’. These were actual conversations, based on mutual trust and respect. And believe me, this is a stark contrast to many of the other conversations between managers and ministers I’ve witnessed.

After a while, I began to see that these ‘black swans’ of leadership shared some skills that were much more than coincidental. It was what set them apart from the rest. And from me, for that matter.

At that time I was in my first real management job myself. I was temporarily leading a department in the Dutch Ministry of Education. My team was doing ok, generally speaking, but I was struggling to prove myself. I was constantly busy trying to convince everyone I was capable of leading the department. I completely believed in what I now see as the biggest leadership paradox out there:

The idea that, on the one hand, leaders should be decisive and always know the best way forward, while at the same time they should be liked by everyone.

I know see that this paradox is one of the main reasons why so many of our leaders fail. People, when put in leadership positions, start by trying to make both of the opposites in this paradox work. In my experience, that’s highly frustrating and depressing way to bend yourself backwards. When that turns sour, they choose to focus their ‘leadership style’ on either one of the two sides.

That’s why we see so many leaders either puff themselves up to impersonate a kind of heroic leadership where they are infallible and always strong, or they are liked by everyone, but they don’t go anywhere.

When I was in this situation, there were so many things I was convinced I needed to BE or DO to be a leader, that the only way I could sort of live up to that was to play the role of a leader.

I created a ‘wall of certainty’ around me, that gave me an aura of being very confident. And it never let people get close enough to notice that honestly, I wasn’t. My team got the job done, but they really didn’t like me at all.

People sense intuitively when you disconnect your behaviour from who you really are.

And as a result, it’s almost impossible to really connect to them. It slowly dawned on me that my wall wasn’t protecting me. It was keeping me from growing into the leader I knew I could be. I understood that those leaders I saw doing such a great job, already understood that this paradox was both ineffective and very much last century.

In my role as a leadership coach today, I talk to leaders struggling with this paradox on a daily basis. And I now see that the key to breaking the paradox is most easily summarized as ‘communication’.

But it has so many layers: it is about how you communicate, yes, but that is informed by your understanding of yourself as a person, your triggers, your insecurities. It is about your ability to make an honest connection with other people, because if you do, you can be both firm and effective, and be open to others ideas, help people grow and not only be liked, but loved.

I believe that ‘sincerity’ is the crucial element to the most effective form of communication. Not even in leadership alone, but in private relationships as well. Sincerity implies connection to your beliefs, needs and wants while at the same time being open to other people’s worlds.

And that’s when the magic happens. That’s when you can go let go of role-play and puffing yourself up as a leader. That’s where you can let go of the co-dependent need to be liked by the people around you.

Because I so very much believe in the power of sincere communication, I have written a white paper on the topic. I hope it will help you break through the leadership paradox and become the type of leader that truly has an effective and positive impact in the world. Our 21st century really needs you

You can get your copy by entering your contact info here, and I’ll send it to you right away: