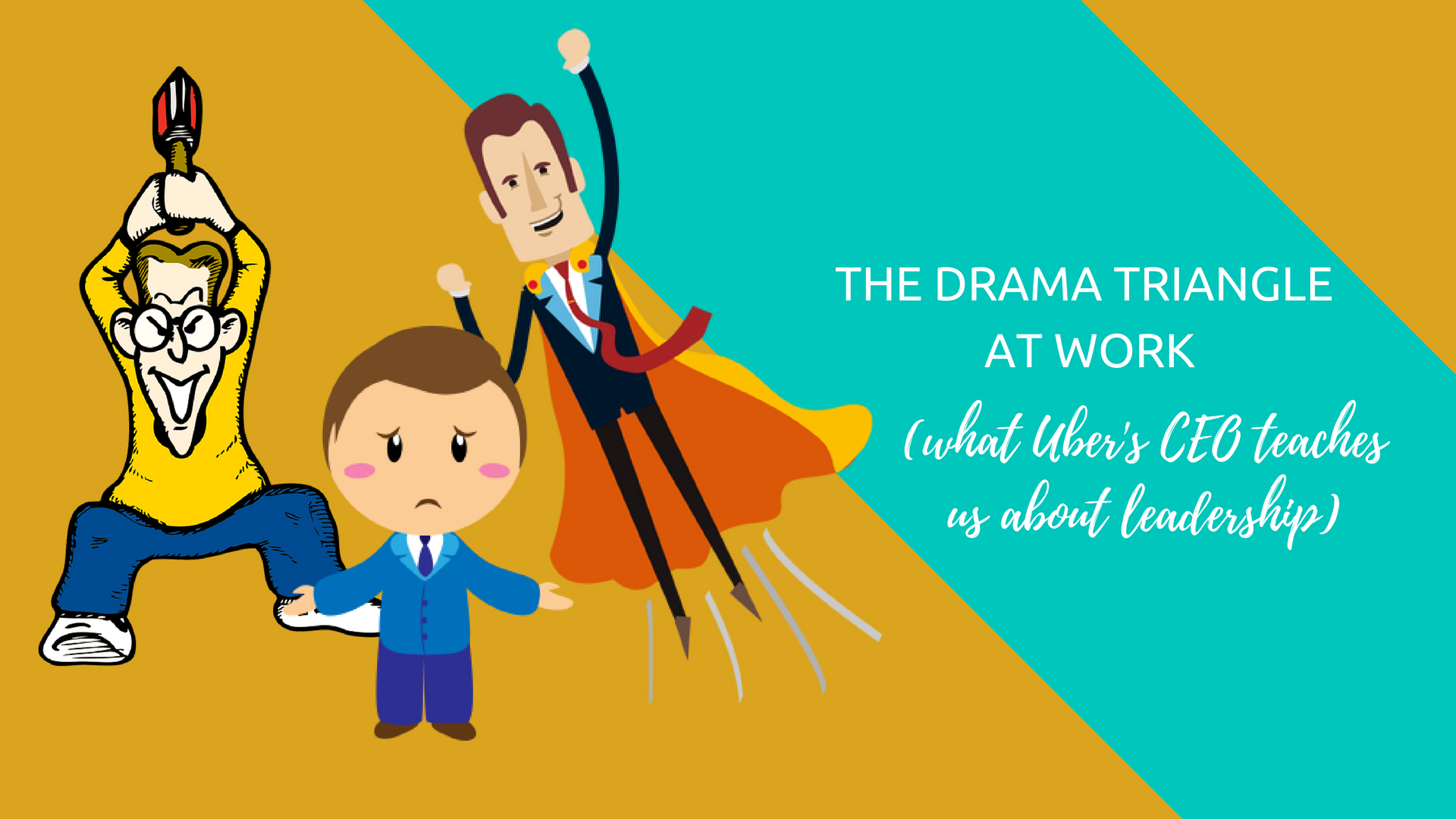 The Drama Triangle at work. What Ubers CEO teaches us about leadership.

I deeply believe, as I’ve shared many times on this website, that before someone can be a great leader of others, he or she must have ‘cleaned up their own shit’, so that won’t get in the way of leading.

The recent video in which we see Uber CEO Travis Kalanick arguing with one of his drivers, makes it abundantly clear that even many leaders of huge companies like Uber haven’t got that part sorted out.

In the video, we see Kalanick on a night out with friends taking an Uber. The driver starts complaining about changes in Ubers tariffs. Kalanicks reaction to this mans complaints is a really beautiful example of one of the most useful communication theories out there, Karpman’s Drama Triangle.

Before explaining what I am talking about exactly, let me say that, would I have been in Kalanicks situation, I would have been pretty annoyed with this man too. It’s quite inappropriate to challenge Kalanick about Ubers policies on a night out with friends. That being said, Kalanicks position and power are such that he really should know better than to let himself be so provoked by this man.

The Drama Triangle at work

So let’s look at the Drama Triangle and see what this unfortunate incident can teach us about it.

Karpman used triangles to map conflicted or drama-intense relationship transactions. The Karpman Drama Triangle models the connection between personal responsibility and power in conflicts, and the destructive and shifting roles people play. He defined three roles in the conflict; Persecutor, Rescuer (the one up positions) and Victim (one down position). Karpman placed these three roles on an inverted triangle and referred to them as being the three aspects, or faces of drama. When someone engaged in a conflict takes on one of the roles, the Drama Triangle is immediately triggered. Most often it starts with the persecutor or the victim. When that happens, the other people in the conflict are pushed towards their ‘preferred’ role in the triangle.

There are two crucial things to understand about the Triangle:
1) none of these roles are authentic behaviour. The Drama Triangle is basically a form of role play
2) everyone has at least one role that they feel very comfortable in (though not always consciously), and most of us have 1 role that we automatically step into in challenging social situations.

When Travis Kalanick took that Uber on Super Bowl Sunday, he was faced with a victim. The driver was complaining, placing blame on Uber and Kalanick without acknowlegding his own responsibility in the matter.

And Kalanick, undoubtedly unaware of the risks of the Drama Triangle, followed suit by retaliating and thus stepping into, what we can only assume is his preferred role of the persecutor.

Instead of having a civilised conversation about an actual problem in someone’s life (bankruptcy), we now have two angry boys pointing the finger at each other. The motivations for each participant is to get their unspoken (and frequently unconscious) needs met in a manner they feel justified, without having to acknowledge the broader harm done in the situation. As such, each participant is acting upon their own selfish needs, rather than acting in a genuinely responsible or altruistic manner (source: Wikipedia).

The way out of the Drama Triangle (and into leadership)

Luckily, the way out of the Drama Triangle isn’t very complicated. That isn’t to say that it isn’t hard.

Acey Choy created the Winner’s Triangle, and The Power of TED came up with the Empowerment triangle. Both are basically the same in my perspective (so I combined them in one picture below): The new roles, the Creator, the Coach and the Challenger, are basically the grown-up versions of the Drama roles.

Instead of being a victim, the Creator accepts the fact that he/she cannot do everything alone and that they may be vulnerable. They ask and accept help, thus making themselves powerful in their own right and working towards an actual solution.

Instead of being a rescuer, the Coach is caring and ask how they may help the creator, thus empowering the creator to decide what they need and want.

Instead of being a persecutor, the Challenger is assertive about his or her own needs, without blaming the creator.

All of this has to do with accepting responsibility for one’s own position, without asserting power over other people. And the beauty about this is, that as soon as someone accepts the empowerment version of their preferred role, the whole system changes, and the situation is lifted from Drama into potential.

Being the challenger instead of the persecutor

In the Kalanick/Uber driver incident, what could have gone differently?

The biggest win could have come from Kalanick quietening down his challenged ego, and setting healthy boundaries to protect his privacy. He could have also acknowledged the drivers message that he went bankrupt, without accepting blame, just showing kindness and creating a human connection.

‘I am really sorry for your tragedy. This must be really hard to deal with. [It’s always wise to acknowledge someones pain] This, however, is not the time to discuss it. I am on a night out with friends. [healthy boundaries]  Also, I stand behind our decision to change policy and cannot take responsibility away from you about the decisions you make about your life.’  [making it clear that responsibility for what happened lies with the driver himself, at least partially]

If  the driver’s message resonated on some point, he could have extended an invite to come discuss the matter on a more appropriate time, while making it very clear that he wasn’t taking responsibility.

Why is it so hard & what to do about it

The truth is, it’s quite hard to respond they way I suggested above when under attack. We alle have examples where we got stuck in the Drama Triangle. To many, the response above may sound impossible to reach.

But it isn’t. There is only one thing you should do before you can respond to people who take on one of the Drama roles: it’s to resolve the things where you are easily triggered. Kalanick apparently is triggered by (unsolicited) criticism. If he wouldn’t take this personally, but instead respond with compassion, he would be much more of an adult leader, instead of an angry child protecting his feelings.

It is absolutely, undeniably and 100% necessary to fully understand and accept your own triggers and challenges, to work through the hurt you’ve experienced in the past, to deal with your Gremlins, and to learn to move away from the drama into potential.

When you’ve done all that, when you can fully own your story, your strengths ànd your weaknesses. When you are no longer afraid to bruise your ego, then you are ready to lead a multi million dollar corporation.

Before that, you’ve got other work to do.

(I am happy to see, by the way, that Travis Kalanick apologised to his team and is seeking leadership coaching!)

This site uses Akismet to reduce spam. Learn how your comment data is processed.